Here’s an excerpt from a January 7, 1934 NYT article reporting advice that the head of the Finnish alcohol monopoly gave the United States about returning to legal alcohol — which had happened December 5, 1933: 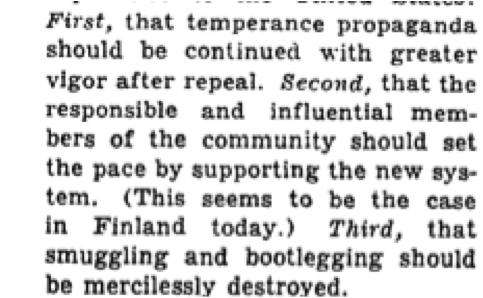 A friend objects to a weight base (X cents per gram) for taxing marijuana. “Crop quality varies enormously,” he says, “so it would be arbitrary to assess the same tax per weight for all of it.”

But I still like a weight base (except if we can tax concentrates by potency).  Any tax will distort the market, one way or another.  A weight base is not perfect, but a price base is worse.

Take the beer tax. It’s based on volume only – barrels, or gallons.  Volume for a liquid is like weight for a solid.

The federal beer tax is $18 per 31-gallon barrel. State beer taxes are based on gallons, too. All these taxes apply regardless of price, or alcohol content – or quality.

Folks worry that a cannabis tax based on weight will create an incentive to make each gram as potent as possible.

But that same incentive is present with beer.   END_OF_DOCUMENT_TOKEN_TO_BE_REPLACED

Here from vox.com are two objections to marijuana retail monopoly that don’t hold up, in my opinion:

“For states to establish a monopoly on marijuana production and sales, voters or elected officials would have to approve laws that essentially give state governments control over the marijuana industry. Even if a majority of Americans support legalizing marijuana, it’s unclear whether they would support turning their state into a pot dealer — and even if they did, state governments might be reluctant to do this, since it would mean forcing state employees to violate federal law . . . ” That’s from http://www.vox.com/2015/4/27/8500531/marijuana-legalization-commercialization-prohibition.

First, voters in some states might like monopoly: A poll I did among North Carolina voters in 2013 showed a clear preference for state stores (58 percent), our model for liquor, over private stores (19 percent), with 23 percent undecided. https://newtax.files.wordpress.com/2013/03/nc-marijuana-polling-march-2013.pdf, page 2.

Second, in the face of federal law, North Bonneville, Washington, is already selling marijuana via a quasi-monopoly, a Public Authority of the kind described in Chapter 4 of the RAND Report. See  http://www.washingtonpost.com/business/economy/a-local-government-in-wash-state-tries-to-corner-the-market-on-marijuana/2015/03/16/fccb8216-c9b7-11e4-b2a1-bed1aaea2816_story.html.  No arrests yet.

Not only a retail monopoly, of the kind that 17 states have for liquor, seems plausible.  Production monopoly offers a lot of control;  Louisiana is considering having LSU do the growing, as mentioned in a later post.

The Center for New Revenue seeks a volunteer researcher.   END_OF_DOCUMENT_TOKEN_TO_BE_REPLACED

A Colorado bill, HB 15-1367, would cut its special retail excise tax rate on marijuana from 10 percent to 7 percent. Having come to think that early taxes have proved too high, that makes sense. But what doesn’t make sense to me is the effective date – July 1, 2017. Now is the time the industry needs relief.  Twenty-six months from now, prices may be much lower. A lower rate (7 percent) on a lower base (lower prices due to plenty of supply, etc.) just loses revenue. I would think make the rate 7 percent now, and let it bounce back to 10 percent in mid-2017.  Or at least wait and see.

UPDATE:  I negotiated the right to post this piece, and have a slightly better version here, or at https://newrevenue.org/2015/10/20/picking-winners-to-grow-marijuana/.

Original April 2015 post read this way:  “Picking Winners: Deciding Who Gets to Grow Marijuana Commercially” – an article I wrote (and waived the right to post) is here, or at http://marijuanalegalization.about.com/od/ModelsofLegalization/fl/Picking-Winners-Deciding-Who-Gets-to-Grow-Marijuana-Commercially.htm.  Comments welcomed.

Rachel Barry, a policy scholar at UC-San Francisco’s Center for Tobacco Control Research and Education and my colleague on the California Blue Ribbon Commission on marijuana legalization, has prepared this extensive chart or table comparing marijuana laws and tobacco laws.  To see it easily, click on Rachel Barry MJ policies April 17, 2015; a downloadable Word version is Rachel Barry Word MJ policies April 17, 2015.   I think it’s very useful.  The pasted version below gives you an idea, but you will probably need one of those links to see the whole thing.  (This chart is her work in progress, not that of the Commission.)

She welcomes feedback, and hopes to provide updates as laws change. Please contact her directly with suggestions, corrections, questions, and updates: email:rachel.barry@ucsf.edu,  I’ll try to keep up with her.  (Thanks, Rachel, for letting me post this.) END_OF_DOCUMENT_TOKEN_TO_BE_REPLACED

2.  Progessive — wealthy and corporations are the primary stakeholders.  The housekeepers’ unions at the airline hubs may be the voices for the exception that proves the rule.

3.  I’d even be for a higher gasoline tax, and it’s regressive.  Poor folks drive farther to work than rich folks, who can afford to live in the middle of things.

The jet fuel tax may be low hanging fruit, a sitting duck, underbrush — consensus item.  The kind of thing you put into a bill or package that a majority will sign off on.  Tax Reform, if it follows the 1986 model, would make hundreds of changes to the Tax Code.  Maybe it won’t happen.  But it won’t happen without a list.

Tax folks like to work through theory.  So here’s a here is a trip to Theoryland, designed to exhaust the options for allocation of the privilege to sell marijuana commercially.

Maybe a state will say not everyone can grow marijuana commercially. If a state makes that decision (whether it should limit growing is not the subject here), how might the privilege to grow and sell marijuana be allocated? By lot, on the merits, by growing history, by charging steep fees, by annual auction, or how?  I’ll get into those options later.  Voucher privatization is a democratic model for sharing the wealth. OK, it’s not practical, certainly not in the short term.   END_OF_DOCUMENT_TOKEN_TO_BE_REPLACED 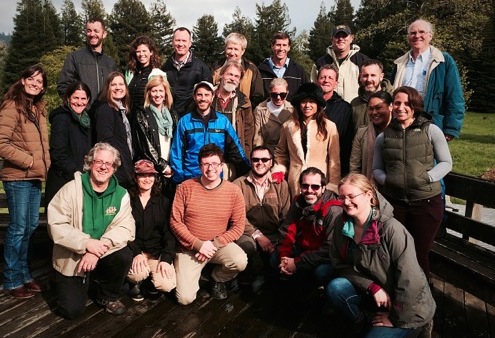 Having doubted that square footage (or canopy) fees or taxes could be deductible under 280E on the federal income tax return of a cannabis-growing business, I asked Todd Arkley, a Washington State CPA with a lot of cannabis clients. Todd knows more than I hope ever to learn about tax accounting.  Whether you call a payment based on square footage a tax or a fee, he makes the case that it is deductible.   END_OF_DOCUMENT_TOKEN_TO_BE_REPLACED

GUEST POST from a California observer of Arcata’s electricity tax. The writer, whom I thank, asked to remain anonymous. I don’t necessarily agree or disagree with opinions in the post, but find it thorough and thoughtful.  And whatever you think of an electricity tax, Arcata’s tax seems to have glitches.  Here is a better-formatted version:  Guest-post-from-a-california-observer-of-arcata_s-electricity-tax

Indoor marijuana grows are notorious consumers of electricity.  Following the lead of Arcata, California, which collects a 45-percent tax on excess electricity consumption, Boulder County, Colorado, is taxing electricity use of marijuana grow operations by the kilowatt-hour:

“Boulder County will levy a charge of 2.16 cents per kWh on all electricity consumed by marijuana growers, which works out to about $100 extra for each kilogram of finished pot. END_OF_DOCUMENT_TOKEN_TO_BE_REPLACED