Here’s a chart that’s causing a lot of consternation and misinterpretation: 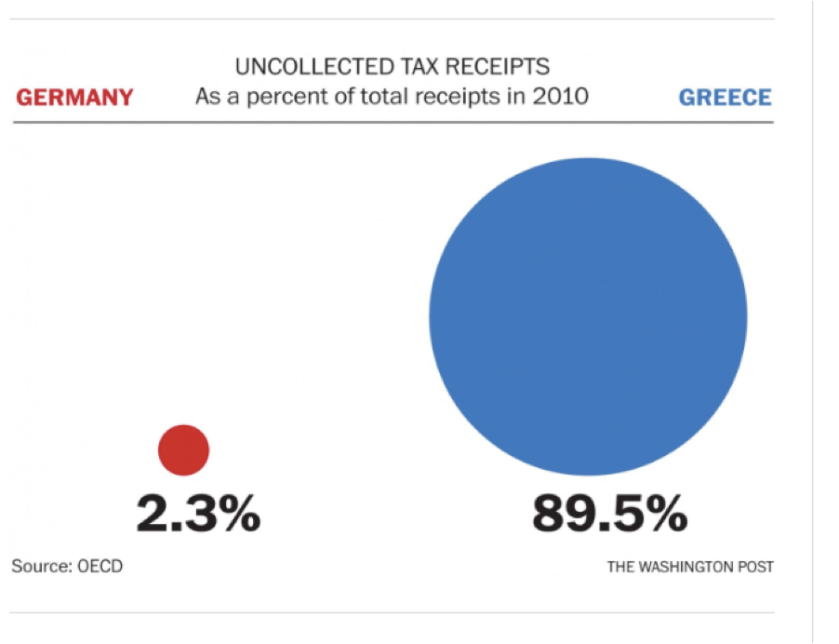 Bill Turnier sent me here, or http://www.bbc.com/news/magazine-33479946:  The numerator seems to be all outstanding uncollected taxes, from years and years — not just the current year.

The BBC says the number:

actually relates to historic tax debts – not tax that Greece was due to collect from its citizens in 2010.  The reason the figure is so big, according to tax blogger Richard Murphy, has to do with the way the Greeks have been keeping their accounts.  “Sensible tax authorities take a view on this issue every year and say, ‘We’ll write off a proportion of our tax debts that we know we are never going to recover.’ Greece, though, is recording this extraordinary large number because they haven’t bothered to write off their old debts.

Here is what the BBC says about the underground, or shadow economy:

A study quoted by the IMF suggests that between 1999 and 2010 the shadow economy in Greece made up 27% of the country’s GDP – compared to an average of 20.2% in other rich countries.

That means that nearly one in four euros that potentially could be taxed in the country’s economy simply weren’t declared to the authorities, and the Greek government missed out on approximately 28bn euros ($31bn) of additional revenue each year.

But Richard Murphy, who has studied the size of the shadow economy in Europe, says Greece is not as bad as some of its neighbours.

“Greece has a problem but Bulgaria, and Romania are worst. Italy is up there alongside it. But it is an issue which has clearly contributed to the current Greek crisis,” he says.

Here is the chart (6.16, downloadable at http://www.oecd.org/site/ctpfta/taxadministrationdatabase.htm) the BBC links to: