Primitive marijuana taxes start out “ad valorem,” that is, as a percentage of price. Many of my friends who are non-tax drug policy people gravitate toward these price-based taxes, because prices tend to increase with potency, and roughly with intoxication.  I agree:  Price-based taxes are a good first step in what the RAND report for Vermont calls the “tax-base march of progress.”

But price-based taxes are easy to manipulate. For instance, North Carolina’s new 7.5 percent sales tax on tickets (“admission charges”) is getting eroded by an affiliate of the state, the UNC-Chapel Hill repertory theater. For tickets, or medical devices, there is no analog to the useful weight base for marijuana taxes. But a ticket tax illustrates the flimsiness of taxes based on price, as explained below.

When you order tickets, the theater separately states a ‘Web Handling Fee” that is not taxed. Here’s what an order looks like: 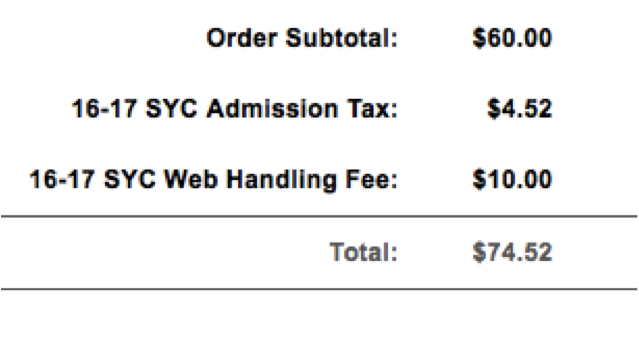 This show closes July 31, but the order page is here.

Now UNC’s own interpretation of the statute might seem to tax this fee:
“Admission Charge:

“An admission charge includes a charge for a single ticket, a multi-occasion ticket, a seasonal pass, an annual pass; a membership fee that provides for admission; a cover charge; a surcharge; a convenience fee, a processing fee, a facility charge; or any other charges included in gross receipts derived from admission.”

But maybe they have a lawyer saying that a “Web Handling Fee” is not taxed. And they can probably find third party charges in that range that don’t bear tax. But no third party seems involved here.  In any event, even a state entity is finding a way erode this tax at the margin.  Private taxpayers are even less likely to respect a flimsy tax.

OK, this exact ploy can hardly erode a marijuana tax.  But it illustrates a problem with price taxes:  What are you taking a percentage of?   Bundling involves giving away a taxed product (like marijuana) with the purchase of tax-free product.  You might call the UNC theater’s ploy “reverse bundling.”  Bundling aggregates; reverse bundling disaggregates.

Sure, weight-based taxes favor potent product.  THC taxes would be better, in cases where we can measure THC replicably.

But the flimsiness of price-based taxes is starkly illustrated by the transfer pricing shenanigans that have put $2 trillion into low-taxed foreign subsidiaries of U.S. multinational corporations.  UNC’s ploy is negligible compared to those.