[Oregon] State Rep. Carl Wilson . . .and other lawmakers struggle to figure out how to tax pot without driving sales underground. . . .

“It is becoming clear that the 800-pound gorilla here is taxation,” Wilson said. “Many members of the committee are deeply concerned with marijuana products being taxed out of the market, making everything we have done useless.

END_OF_DOCUMENT_TOKEN_TO_BE_REPLACED

Sure, a lot of marijuana commerce is taking place in the illegal sector right after legalization in Colorado and Washington, END_OF_DOCUMENT_TOKEN_TO_BE_REPLACED

Quotes from FDR team on re-imposing alcohol tax in late 1933, with the message of start with low taxes:

Topic (sentence fragment): “The assurance by tax adjustment and other means of an adequate supply of inexpensive legal alcoholic beverages which will be able to drive out the illegal competing production by price competition.”

Discussion: “The attempts to control this illegal industry solely by policing the production and sale of illegal alcoholic beverages have not been wholly satisfactory. The enforcement problems of the prohibition period will still remain in those States which continue to be dry after the repeal of the eighteenth amendment. It is believed that the price of legal liquor to the ultimate consumer in the post-prohibition period will be one of the important factors in determining the success or failure of the general effort to eliminate the illegal industry.” END_OF_DOCUMENT_TOKEN_TO_BE_REPLACED

By the promulgator of the excise tax stamp for liquor, David A. Wells’s 1888 Practical Economics is likely to serve any student of excise taxation — especially the chapters on Taxing Distilled Spirits, starting on page 152.

This book is in the public domain.  Pass it on.

Out of copyright, here is The elements of public finance, the 1899 classic by Winthrop More Daniels, thanks to Google.   Of particular interest is the difficulty of setting alcohol tax rates, beginning on page 136. END_OF_DOCUMENT_TOKEN_TO_BE_REPLACED

Native American Tribes in what the Department of Justice calls “Indian Country”  are like sovereign nations, so they can set up systems to allow the sale of marijuana, says the Federal government.  Over 100 Tribes are looking into selling it.

So can a state erect a roadblock and inspect everyone coming out, as a nation can at its international border?  I imagine there is learning on that question, but I have no idea.  Those are questions of federalism or Federal-Tribal law or something that are beyond a tax man.  I know enough to conclude that warrantless federal searches are OK at our borders with the sovereign nations of Canada and Mexico.  But can a state conduct them ever?

And can warrantless searches be effective? Tribal land reportedly is sometimes so remote as to make smuggling across international borders relatively easy.

States that have income taxes (not all do) and that legalize marijuana face an arcane income tax issue:   280E conformity. Simply put, should marijuana businesses, on their state income tax returns, be able to deduct all expenses? Federal section 280E, discussed a good bit at www.newrevenue.org, allows businesses in violation of federal narcotics laws to deduct only cost of goods sold – and not, for instance, selling expenses.  Many state income tax laws track — conform to — the federal tax Code.  That’s why, when you fill out a state tax return, much of the data you need to enter peels off the federal return.

In Oregon, before the 2014 marijuana initiative, state tax law conformed to 280E — it followed the federal tax Code.   Then Measure 91 repealed the state’s version of 280E across the board. Now critics are saying repeal should apply only to marijuana – not to all federally illegal drugs, such as meth and heroin.  Good catch, I suppose, so long as Oregon voters are mad at other drugs.

In California, there is 280E conformity for individuals but not for corporations.  (Huh?)   END_OF_DOCUMENT_TOKEN_TO_BE_REPLACED

U.S. numbers are calculated from: “A cigarette pack today fetches roughly $2.50 at the factory gate, on which government collects $3.80 on average END_OF_DOCUMENT_TOKEN_TO_BE_REPLACED 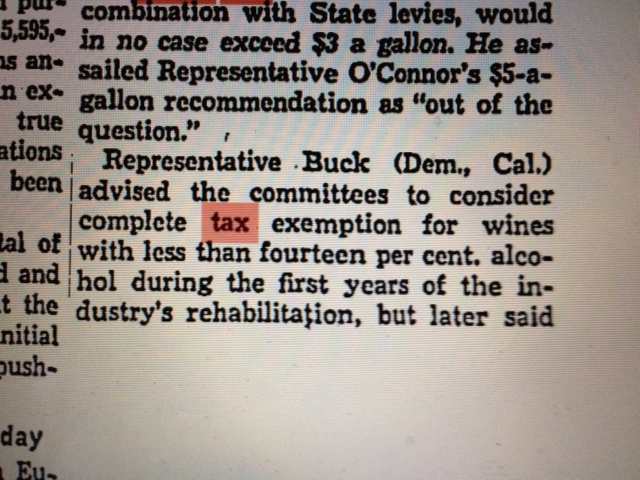 This is from an article in the Baltimore Sun of December 15, 1933, END_OF_DOCUMENT_TOKEN_TO_BE_REPLACED

At some point, someone will have to say who gets them.  Who will say?  And how?  If the basis is past activity, How will the decider evaluate whether claims of historic growing are exaggerated?

And once the decider decides, what appeals will be allowed?  If appeals are allowed, to whom?

A tremendous place to start is “Prosperity Road: the New Deal, tobacco, and North Carolina,” by Anthony J. Badger.  I’m reading it for the second time, this time making notes. END_OF_DOCUMENT_TOKEN_TO_BE_REPLACED